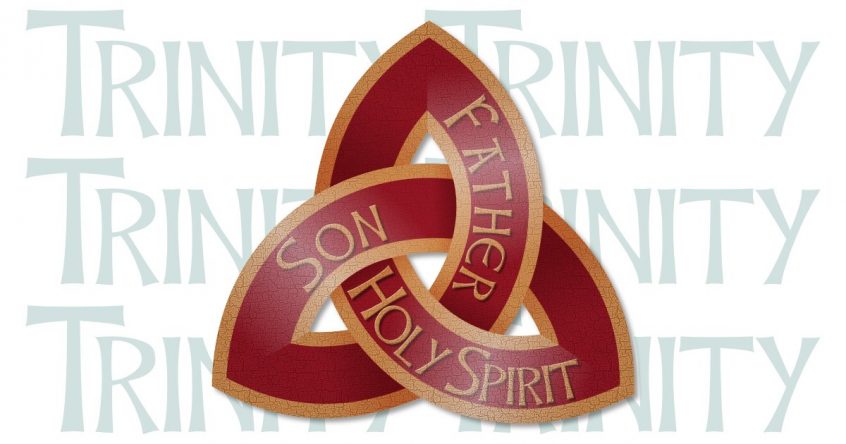 REFLECTION ON THE READINGS

I have a book in my study by the writer Rob Parsons; its title is ‘What they didn’t teach me at Sunday School’. I suppose Rob Parsons should be grateful that he was brought up at a time when going to Sunday School was not as unusual as it is today. Setting that aside, however, in his book the writer describes 12 aspects of the Christian life that he was not taught at Sunday School but claims to have subsequently discovered. As the doctrine of the Trinity is not one of those twelve we might surmise that it formed part of the syllabus when he was a child, but I doubt it. Down through the centuries the very best minds have struggled to comprehend the Trinity while acknowledging that, like all humans, when we attempt to comprehend God we can only see through a glass darkly. Yet the doctrine of the Holy Trinity is so fundamental to how the Christian Church understands God that some of the greatest minds of the early Church spent years chewing over every aspect of it.

In the period framed within the writings of the Hebrew Scriptures, what we know as the Old Testament, the Jewish people were unique in being monotheistic. In contrast to the peoples around them who worshipped a multiplicity of Gods, the Jewish people had only one. This God had revealed himself to them as the Creator of the universe. As Creator he has ultimate power over everything. As Creator to whom all creatures owed their very being he alone was to be worshipped. Through a series of covenants this Creator God established a special relationship with the Jewish people. If they remained loyal to him, he would protect and sustain them. The thrust of the Old Testament narratives is how they repeatedly failed to meet their end of the agreement, and the response of God to their failures and how he sought to restore his relationship with them.

Then around 2000 years ago came Jesus, his birth announced by angels, claiming to be the Son of God, calling God his Father, in his miracles, healings, death, resurrection and ascension leaving his followers in no doubt that here was a man both human and divine. They came to believe that in Jesus, God had sent the long-awaited Messiah. This same Jesus promised his followers that after his ascension, God would send them the Holy Spirit. The Holy Spirit would live within them as God’s presence, empowering them to take the message of Jesus into the world and make disciples of all men. And that was their experience at Pentecost which we celebrated last Sunday.  Their experience of the Holy Spirit was reflected in their changed outlook.  On that first Pentecost, sometimes referred to as the birth day of the Church, their experience of the Holy Spirit transformed them from a group of men and women huddling together behind closed doors for fear of what the crowds outside might do to them, to fearless evangelists proclaiming the Good News of Jesus to those same crowds they had feared earlier.

In the writings of the early Christian Church we find writers, apostles and evangelists, from a strictly monotheistic background, writing letters in which they begin by greeting their addresses in the name, not just of God the Father, but also in the name of the Son, and of the Holy Spirit. While the specific word Trinity does not appear, the New Testament is full of Trinitarian references. In our Epistle the Apostle Paul writes,’ When we cry, ‘Abba! Father!’ 16it is that very Spirit bearing witness with our spirit that we are children of God, 17and if children, then heirs, heirs of God and joint heirs with Christ.’  The Apostle Peter speaks of those who are ‘chosen and destined by God the Father, sanctified by the Spirit for obedience to Jesus Christ and for sprinkling with his blood’.   The first disciples could not escape the belief that in Jesus they had seen God, and in the Holy Spirit they had experienced the indwelling power of God.  There is evidence that from the very beginning of the Church people were being baptised in the name of the Father, and of the Son, and of the Holy Spirit.  This is not to suggest that the early church had devised a Trinitarian formula, a precise theological definition of how the three persons of the Trinity related to one another.  Attempts at doing that would come later in response to the threat of misleading teaching. Christopher Rowse, writing on the subject in the Saturday Telegraph, says, ‘If you think you comprehend God, you have misunderstood. He must be beyond formulaic comprehension. A doctrine like the Trinity cannot be worked out like a mathematical theorem or a scientific theory. We would never have known about it if God had not revealed it.’
​
Later, as I said earlier, gifted theologians put their minds to trying to comprehend the relationship of the three members of the Trinity. Were they manifestations of the same God, or were they separate entities. Was the Son a created being or had he existed from the beginning, and was the Spirit co-equal with the Father and the Son, or devolved from them. The Church in the East and the West split over their different understandings and have slightly but significantly different versions of the Creed.
How do we illustrate the Trinity? In recent times I have heard people use the shamrock with its separate lobes that each form part of the same leaf.  I have heard water used. It can exist as ice, water and steam, yet essentially it is the same. Ultimately none of these are satisfactory. It is a mystery. There is a story that one day St Augustine was walking along a beach pondering the question. One in three or three in one? He came across a child who had dug a hole in the sand and was running backwards and forwards from the sea to the hole, using a bowl to pour seawater into it. Intrigued, St Augustine asked the child what he was doing. ‘I am trying to empty the sea’, was the child’s reply. The saint was just about to burst out laughing, when he heard the voice of God saying, ‘just as the sea will not fit in that hole, so you cannot fit everything about me in your head.’

So how does our understanding of the Trinity shape our worship and how we relate to our church family and those who live in our parishes but have not as yet come to faith in Jesus. I believe it all depends on the stress we place on the individual members of the Trinity. If we place too much stress on any one we will be strong in some ways but weak in others. If we achieve the right balance between the three we will be able to move forward and grow. There’s another sermon on that for another day. The writer JB Phillips, some of you may have his paraphrase of the New Testament, wrote a book called ‘Your God is Too Small’ in which he argued that if our concept of God is wrong or inadequate our Christian lives can be stunted and become misshapen. Today on Trinity Sunday we may join in with the hymn of the four and twenty elders who, after casting their golden crowns before the throne declared, Thou art worthy, O Lord, to receive glory and honour and power; for thou hast created all things, and for thy pleasure they are, and were created.